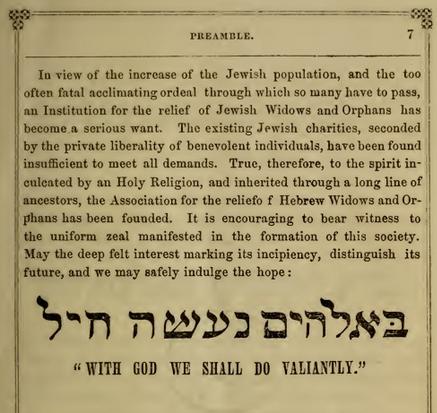 Preamble, Constitution of the Association for the Relief of Jewish Widows and Orphans of New Orleans, 1855.

Thirty men played principal roles in the 1855 founding of the Association for the Relief of Jewish Widows and Orphans of New Orleans and the 1856 opening of the Home for Jewish Widows and Orphans (the Home), the nation’s first purpose-built Jewish orphanage. Most of the founders were foreign born and none were native New Orleanians. They ranged in age from 27 to 54, and many actively supported the Home throughout the rest of their lives.

The following brief sketches, which supplement Chapter 1 of Most Fortunate Unfortunates (forthcoming from LSU Press in fall 2023), are intended to capture a sense of the men as a group when they founded the Association and not to provide complete biographies. For this reason, these sketches focus on date and place of birth, marital status, in addition to occupation and synagogue affiliation around the time of the organization’s founding. The sketches also indicate the number of persons each founder enslaved. Beyond leadership positions identified, each person listed below was a founding member of the Association or attended one or more organizational meetings from November 1854 through March 1855. Sources listed are in addition to the Association’s records. Type your paragraph here.